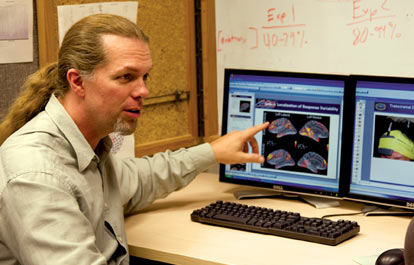 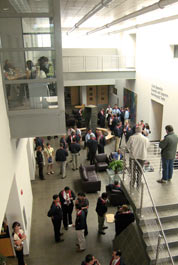 ABSTRACT: fMRI is a popular neuroimaging technique that measures signals that change as a function of time from precise spatial locations in the brain. The typical fMRI approach is to make claims about brain function primarily on the basis of the spatial location of brain activity and not on the basis of how the signal changes as a function of time. My talk has three parts: First I will argue that although the fMRI signal has inherent limitations with respect to the temporal dynamics, recently discovered properties of the temporal dynamics of brain networks in combination with appropriate experimental designs may overcome such limitations. I will next discuss two experiments that examined the temporal dynamics of fMRI signals at the whole-brain and at the more restricted, hippocampus level. Both experiments relied on a task in which subjects rapidly produced overt speech over a period of 16 seconds. In the first Experiment, slice-based and group-spatial-ICA techniques were used to explore whether starting, stopping and maintenance of speech relied on distinct whole-brain networks. We found a cortico-subcortico network with a bimodal activity profile and a cortical network with a sustained activity profile that we interpreted in terms of starting/stopping and maintenance of speech, respectively. Finally, in the second Experiment, slice-based, group-spatial ICA restricted to the hippocampus, and dual regression techniques were used to discover the functional organization of the hippocampus during the production of speech. Here we found that different aspects of the task as well as the default mode network activated different regions along the hippocampal long axis. These results illustrate how temporal and spatial information at both the whole-brain and region specific level can be used to make claims about brain function in fMRI studies.