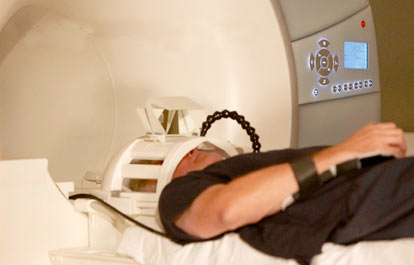 Last year was particularly good for the growth of our addiction research area. Collaborative efforts among MRN and other scientists combine neuroimaging and genetic approaches to identify genes that influence the progression of addiction that could eventually guide treatment and prevention efforts. Dr. Kent Hutchison leads the addiction research team and recently received a five-year grant to examine the neurobiological effects of the medication varenicline on smoking cessation. Also, Dr. Sarah Feldstein Ewing received a five-year grant to study risky behaviors in adolescents along with two exploratory grants to develop new treatment approaches using fMRI. Dr. Vince Clark’s study of recovering cocaine and methamphetamine addicts has led to the discovery of possible differences in brain structure between those who relapse and those who do not. When comparing MRI scans of abstainers and relapsed users, abstainers showed greater activity in an area of the brain associated with emotion and attention. “One function this area of the brain handles is interpreting the world around you in terms of how it affects your health and safety,” Dr. Clark explains. These scans, when combined with psychological histories of recovering stimulant addicts, have so far been 90% accurate in predicting relapses–hopefully leading to new rehabilitation techniques.

This project aims to identify neural, psychophysiological, and behavioral markers of alcohol sensitivity, and to understand the relationships between these measures and those obtained through questionnaire-based self-reports.  In order to understand these relationships, we will use intravenous infusion of ethanol to achieve and maintain a constant breath alcohol concentration in participants while they complete tasks of response inhibition and cue reactivity while undergoing fMRI.  The findings from this project will help to refine the endophenotype of alcohol sensitivity for use in future studies that investigate the genetic basis of sensitivity.

Effects of Chronic Alcohol Use on Neurocognitive Function

Chronic alcohol use is known to affect the structural integrity of the brain, which is believed to contribute to poor cognitive functioning and may lead to worse treatment outcomes.  The goal of this area of research is to identify the key changes that occur both the behavioral and neural levels as a result of chronic alcohol use.  Once these changes are identified, it may be possible to use neuromodulation techniques to improve functioning in damaged regions in order to supplement current treatment approaches.

Copy number variations as one type of DNA structural variation alter more nucleotides than any other genetic mutations. It has the potential to influence normal development and risk of diseases. In this project we studied the CNV effect on substance use disorders from multiple levels using brain function and structure features. Additionally, we investigate the co-morbidity among disorders involving various substances.

Cocaine abuse and dependence are chronic, relapsing disorders for which there are few effective treatments. Changes in frontal and sub-cortical neural circuitry following prolonged drug exposure can last for years after cessation and may compromise an addict’s ability to suppress drug seeking when exposed to drug-related cues. Attentional Bias Modification (ABM) training purportedly reduces the attentional response to salient drug stimuli and has been shown to be efficacious in treating alcohol dependence; however, the efficacy of ABM in treating individuals with cocaine addiction has yet to be empirically determined. Previous research suggests that chronic cocaine users also exhibit a decreased neuronal response during inhibitory control in addition to the enhanced neuronal response to salient drug cues. Although extensive evidence of these two neuronal abnormalities exists, to date we are not aware of a study that has directly compared the differential validity of these two metrics (i.e., enhanced cue reactivity and decreased inhibitory control) for predicting relapse. Additionally, our preliminary data provides evidence of increased intrinsic neuronal activity (functional connectivity; fcMRI) within a frontal sub-cortical circuit in CCA relative to controls. Therefore, our current study has two primary objectives that are both clinically significant and highly innovative. First, we will investigate the efficacy and mechanism of action of ABM in treating cocaine addiction (Aim 1). Second, we will determine which of the three neuronal abnormalities (i.e., enhanced cue reactivity or abnormalities in inhibitory control or increased fcMRI) are more predictive of relapse and drug utilization (Exploratory Aim 1).

Craving can be reliably elicited in the laboratory with humans, is associated with alcohol dependence, and is a primary target of biological and behavioral interventions. Activation of mesolimbic and mesocortical structures has been implicated in the development and expression of craving for alcohol and other drugs. Dopamine (D4) receptors are localized to these same structures and our preliminary work has suggested that a D4 antagonist moderates the experience of craving after exposure to alcohol. Our previous research has also suggested that the DRD4 VNTR polymorphism is a genetic factor that influences alcohol-elicited craving. The aims of this project are to determine whether exposure to alcohol increases activation of mesolimbic and prefrontal brain structures using BOLD fMRI, to determine whether this activation is correlated with the subjective experience of craving, to identify genetic variation that influences this activation, and to identify medications that attenuate this activation. The successful completion of the research is also expected to advance our understanding of the role of genetic factors and lead to the development of pharmacotherapies that can be tailored to the individual based on genetic variation.

The alcohol-related phenotypes that are commonly used in genetic studies are often based on broadly defined diagnostic criteria. We have focused our previous research on the development of intermediate phenotypes, or endophenotypes, that are more proximal to the biological mechanisms that underlie the etiology of alcohol dependence (e.g., acute effects of alcohol). The extant literature as well as our own previous studies clearly suggests that m opiate receptors and the m opiate receptor gene (OPRM1) are important in terms of the acute effects of alcohol. Likewise, our preliminary data indicate that cannabinoid (CB1) receptors and the cannabinoid receptor gene (CNR1) strongly influence affective responses to alcohol. The first aim of the proposed research is to replicate and extend our previous research by testing whether a functional SNP (A118G) in the OPRM1 influences the effects of an acute infusion of alcohol, as compared to a saline infusion, on physiological and subjective measures of stimulation, sedation, and mood. The first aim will also test whether this effect is specific to alcohol dependent individuals by comparing alcohol dependent individuals with healthy, non-dependent drinkers. The second aim will replicate and extend our research on the CNR1 by testing whether a functional SNP in the CNR1 influences acute responses to alcohol and whether this effect is more pronounced among alcohol dependent individuals. Finally, the third aim will examine the additive effects of these two SNPs.  The proposed study is designed to both build on the strengths and address the limitations of our previous work by utilizing an alcohol infusion protocol (i.e., clamping protocol) to reduce unwanted pharmacokinetic and pharmacodynamic variability across individuals, thereby improving the overall power to detect the effects of the genetic variants and their interaction. In addition, the proposed research will address the limitations of our previous work by using a saline control condition and by testing both alcohol dependent and healthy non-dependent controls. These design improvements will allow us to examine whether or not the effect of genetic variants in the OPRM1 and CNR1 have an immediate effect on responses to alcohol or whether these variants interact with repeated exposure to alcohol to produce an enhanced sensitivity to the effects of alcohol (i.e., a gene by environment interaction) that is more evident in alcohol dependent individuals.

One of the primary mechanisms underlying the addictive nature of tobacco use is the binding of nicotine to nicotinic acetycholine receptors (nAChRs). The a4 subunit of the nicotinic receptor is highly expressed in the central nervous system and plays a major role in the cognitive effects of nicotine as well as tolerance, reward, and the modulation of mesolimbic dopamine function, all of which are critical to the development of tobacco dependence. Given the importance of the a4 subunit, the gene that expresses this subunit (CHRNA4) is a prime target for research into the genetic factors that influence tobacco dependence. Our preliminary research indicates that there are three single nucleotide polymorphisms (SNPs) that alter expression in cell culture models and change subjective sensitivity to nicotine in a human laboratory paradigm. To better understand the role of this gene and to address the limitations of previous work, we will develop an integrative approach with the following specific aims and hypotheses. The first aim is to utilize a neuroimaging approach to examine activation of brain structures after exposure to alcohol cues. The second aim to determine with a medication that targets this receptor (varenicline) reduces activation of these brain structures and whether varenicline is more effective based on genetic variation at these loci.

The ABQTREAT study will investigate the neural mechanisms of behavior change in individuals with an alcohol use disorder who are randomized to receive either 12 weeks of cognitive behavioral therapy or mindfulness-based treatment. fMRI will be collected at baseline, 3 months, and 9 months in order to determine how the brain differentially changes as a result of treatment, and how these brain changes relate to changes in drinking.