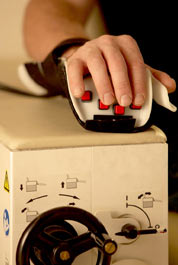 The percentage of older adults (> 60 years) will double over the next 30 years, with a similar increase in the rate of neurodegenerative disorders such as: Alzheimer’s disease, Vascular Cognitive Impairment and Lewy body diseases (Parkinson’s disease, Parkinson’s Disease Dementia and Lewy body dementia). A diagnosis of a neurodegenerative disease can be devastating to the individual both in terms of physical and mental health as well as financial stability. In New Mexico, neurodegenerative diseases are proving to have detrimental effects on our community, livelihood and economic wellbeing. In efforts to combat this public-health problem, aging research at MRN aims to increase the understanding of age-related neurodegeneration in order to improve detection and treatment.

Aging research at MRN focuses on illnesses like Alzheimer’s disease and Parkinson’s disease, as well as conditions such as depression, which can be difficult to treat in older adults. These aging-related neurodegenerative occurrences are associated with regional degeneration of specific networks of the brain (fronto-striatal systems in Parkinson’s disease and hippocampal networks in Alzheimer’s disease).  Our research seeks to find new and innovative ways to detect, treat and prevent these and other neurodegenerative diseases and psychiatric symptoms in older adults. We do this by filling gaps in the scientific community’s knowledge of aging-related neurodegeneration.  Specifically, current research aims to increase knowledge of neurodegenerative brain mechanisms by understanding mechanisms, evaluating biomarkers to improve diagnosis and disease monitoring, and developing effective treatments.

MRN closely collaborates with the University of New Mexico’s Center for Psychiatric Research, with recent efforts focused on improving the efficacy of depression treatment in older adults.

Multiple pathologic processes impact cognition and psychiatric functioning in neurodegenerative conditions. It is important to both understand the mechanisms of dysfunction as well as develop biomarkers that can help diagnose and monitor disease progression. Several MRN investigators are actively investigating these areas.

Neuromodulation is the alteration of certain nerves for certain effects.  Treatment application can be electrical, chemical, magnetic or genetic and works by normalizing nervous system function.   Applications can be invasive or non-invasive and include a wide range of therapies.  Some examples of neuromodulation treatments include: spinal cord stimulation, deep brain stimulation, auditory brainstem implant, transcranial magnetic stimulation, electroconvulsive therapy, and subcutaneous peripheral field stimulation.

For more information about specific studies, see links below.

Cognitive and Psychiatric Functioning in Aging

Principle Investigator Dr. Gary Rosenberg, leads the University of New Mexico's Memory and Aging Center. They have served as one of MarkVCID’s seven research sites funded by grants from the National Institute of Neurological Disorders & Stroke (NINDS), National Institute on Aging (NIA), and the BrightFocus Foundation. The initial 5-year mission of the research sites was to analyze and optimize candidate VCID biomarkers (years 1-2) and participate in a consortium-wide program of biomarker scaling-up, multi-site protocol implementation, and multi-site validation (years 3-5). The recent MarkVCID II phase of the grant has been funded for another five years. The consortium has been expanded to nine sites. The goal will be implementing the biomarkers identified in the first five years that can be used in treatment trials as surrogate biomarkers for VCID. For more information see: MarkVCID Consortium Overview

MRN Principal Investigators Arvind Caprihan, Andrei Vakhtin and Sephira Ryman are collaborating with the University of New Mexico by providing expertise in both MRI and biomarkers for vascular disease and neuropsychological assessment.

The University of New Mexico’s Center for Memory and Aging was recently funded to develop an exploratory Alzheimer’s Disease Research Center (NM eADRC). This project aims to bridge the gap in health disparities in American Indian (AI) rural communities with mobile MRI and on-site testing. In collaboration with the Principal Investigator, Dr. Gary Rosenberg, MRN Co-Investigators Arvind Caprihan and Sephira Ryman are collaborators on the project and provide expertise in MRI and biomarkers for vascular disease as well as neuropsychological assessment.

Despite high rates of Alzheimer’s disease (AD) in older adults, services provided often focus on maintenance rather than treating the underlying illness. There is a need for interventions that not only counteract the symptoms of AD but also address the neurological changes that cause those symptoms, such as brain mechanisms of memory encoding and retrieval. One possible strategy that has garnered empirical support for its efficacy is transcranial electrical stimulation (tES), a form of non-invasive brain stimulation (NIBS).

Dr. Clark’s MEMORI study, funded by National Institutes of Health through a COBRE (Centers of Biomedical Research Excellence) award, tests versions of tES (low- vs. full-current) for its benefits in older adults with and without dementia. In addition, this study tests hypotheses regarding neural mechanisms of change related to tES application. These measures will help us to understand the mechanisms of tES effects in this population, and the individual factors which may underlie variability in the effects of tES across individuals. This study will expand the scientific community’s understanding of the impact of neurostimulation on cognition and neural function in individuals with MCI and AD. Results may lead to new treatment protocols that are capable of improving symptomology as well as underlying neurological deficits. For information about eligibility, please see our Volunteer page.

Despite the proven antidepressant effectiveness of electroconvulsive therapy (ECT) for depressive episodes, procedure-related cognitive impairment (memory) prolongs the period of functional impairment (e.g., unable to work) and delays recovery from severe depressive episodes. Dr. Christopher Abbott at the University of New Mexico’s Center for Psychiatric Research in collaboration with MRN’s PI, Sephira Ryman, proposes a novel method of individualized and precise ECT dosing with amplitude titration informed by electric field modeling and neuroimaging. The contribution of the proposed research is expected to create consistent and effective dosing at the amplitude “sweet spot” of antidepressant response with cognitive safety for late-life depression.

Electroconvulsive Therapy (ECT) remains the benchmark for treatment resistant depression, yet little is known about ECT’s cognitive side effects. A safety biomarker is needed to identify a patient’s susceptibility to cognitive side effects to optimize settings, maximize clinical efficacy and minimize neurocognitive impairment.  Principal Investigator Dr. Jeremy Miller, in collaboration with MRN Co-Principal Investigator Sephira Ryman, is examining potential ECT safety biomarkers and mechanisms of action to improve clinical outcomes and minimize cognitive side effects. His recent project, funded by National Institutes of Health through a COBRE (Centers of Biomedical Research Excellence) award, examines the role of ictal theta power as measured by EEG during ECT treatment.