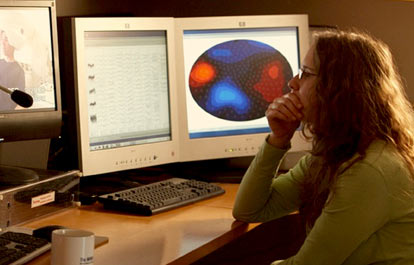 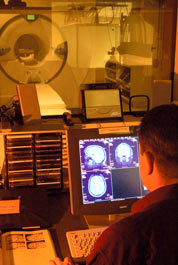 Schizophrenia and other psychotic disorders remain a primary research focus for MRN researchers and collaborators. Great progress has already been made towards the goal of finding earlier and better methods to diagnose these diseases and bring more personalized treatment to the individuals suffering with these disorders.

For example, MRN researchers moved one step closer towards the development of a new diagnostic tool to accurately classify patients with schizophrenia and bipolar disorder, a historically difficult diagnosis. Using fMRI scans (which essentially gives a picture of changes in blood flow over time), Dr. Vince Calhoun and his team have been able to differentiate between the two disorders with better than 90% accuracy. Networks in the brain can be identified using fMRI, thus allowing researchers to see locations and patterns of brain activation while participants are doing a task as opposed to when they are at rest. Dr. Calhoun explains, “When looking at schizophrenia and bipolar disorder, we found two regions that showed profound differences in schizophrenia. Once we identified these networks, we were able to look at whether the changes in these areas could help us better differentiate schizophrenia from bipolar disorder, and also from healthy individuals.” This discovery may eventually provide clinicians with more objective methods to accurately differentiate and diagnose these disorders earlier in the disease progression, which could result in the application of more effective treatments and better long-term prognoses.

Our investigators have developed additional mechanisms for identifying linked changes in large-scale genetic and functional brain imaging data. Using these tools, the relationship between multiple genetic markers and brain activation patterns in schizophrenia were identified. Ongoing research indicates this relationship is different for schizophrenia patients than for healthy controls, which suggests a fundamental difference in the brain organization between these two groups.

Another major accomplishment was MRN researchers receiving an $11M COBRE center grant. The grant will support four projects designed to identify key neurobiological mechanisms related to schizophrenia. The hope is that the results of these studies will eventually be used to facilitate the early diagnosis of schizophrenia and the reliable prediction of treatment outcomes.

One of MRN’s initial projects was the MIND Clinical Imaging Consortium (MCIC), a multi-institutional study of first-episode and chronic schizophrenia patients. MCIC has created one of the world’s largest and most comprehensive collections of anatomical and functional MRI, MEG, and biogenetic data related to schizophrenia. MCIC data have been reported in numerous publications each year, and MRN researchers are expanding the consortium with new collaborations and innovative research methods.

The amplitude of low frequency fluctuations (ALFF) in fMRI measured while subjects are resting has been shown to be quite reliable in healthy subjects, and to correlate with antipsychotic treatment response in antipsychotic–naïve schizophrenia patients.  We are exploring the use of various resting state measures within neuropsychiatric patients undergoing treatment changes to determine any correlations with clinical improvements.

Auditory and Visual Integration in Schizophrenia

This NIH funded project explores the brain mechanism underlying the integration of auditory and visual stimuli using a simple ecologically relevant multisensory integration task. Individuals with schizophrenia often experience cognitive impairment in addition to the symptoms directly associated with the disorder. Previous studies have shown that impaired sensory processing impacts cognitive functioning in patients with schizophrenia. The goal of this study is to explore the link between basic sensory processing and the integration of sensory signals to better understand the deficits or benefits of multisensory stimuli for targeting cognitive impairment in schizophrenia.

This COBRE-funded project is designed to study social emotion and cognition (SEC) in forensic psychiatric populations. SEC impairment is a prominent feature of psychotic disorders, particularly schizophrenia (SZ), but the behavioral and neural correlates of SEC in SZ relative to other psychotic disorders is not well understood. There is also a lack of research examining the association between SEC deficits and dimensions of psychosis symptomatology (e.g., positive vs. negative symptoms). To date, most studies of SEC in psychosis have been conducted in community populations, with less attention directed towards forensic or criminal populations due to the practical challenges of conducting neuroimaging studies in secure institutions and prisons. Criminal offenders with psychotic disorders may show particularly severe neurobehavioral deficits in SEC, but this has not yet been studied. This project will capitalize on the availability of a unique mobile MRI scanner which will be deployed to several secure forensic psychiatric and prison facilities to study criminal offenders with and without psychotic disorders. Structural and functional MRI will be used to examine the neural circuitry underlying higher-order SEC processes (empathy, perspective taking) and associations with psychosis, mood, and aggression symptoms. The results of this study are expected to provide a novel dataset in an understudied forensic criminal population that will elucidate the nature of SEC among different types and features of psychosis.

Psychotic symptoms are the hallmark of schizophrenia, but are also present in about 50% of patients with bipolar I disorder. Despite great advances in neuroimaging, the brain networks underlying these symptoms are largely unknown. Identification of the primary and secondary nodes in the brain underlying psychotic symptoms will have an immediate translational significance for diagnosis and treatment. Psychotic disorders, like schizophrenia, but also bipolar disorder and severe depression, are currently diagnosed through clinical interviewing, with no objective tests for corroboration. The availability of fMR and sMR based features that reflect the severity of psychotic symptoms in a particular patient, could be developed as a diagnostic biomarker. This study would be the first to examine the network underlying psychotic symptoms in early schizophrenia and bipolar I with a novel multimodal approach.