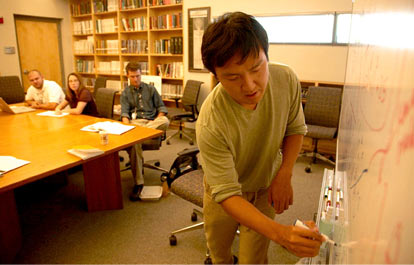 Small visual patterns of two sizes (1.0 and 5.0 degrees visual angle) were presented at 3.8 degrees eccentricity in the left and right visual fields. The small stimulus was designed to activate ~4 mm2 of tissue in primary visual cortex (at 3.8 degrees eccentricity) according to the cortical magnification factors presented in Rovamo and Virsu while the large stimulus was designed to activate ~20 mm2 of cortex (focal vs. extended sources). The background matched the mean luminance of the bullseye patterns. Subjects passively viewed a small fixation point at the center of the screen while the stimuli were randomly presented to the left and right visual fields for a duration of 500 ms and at a rate of 800– 1300 ms (slightly randomized to avoid expectation). Two hundred individual responses for each of 2 stimulus conditions were averaged together. Visual stimuli were projected onto a back projection screen using a DLP projector (Projection Design FX1+) outside the magnetically shielded room. The same projector and notebook computer were flown to each site. Stimulus sequences were generated using Presentation software. Eccentricities and visual angle subtended by the stimuli were kept constant at each site by adjusting the stimulus size based on the path lengths measured at each site.