Fronto-temporal Coherence: A Test of the Disconnection Hypothesis in Schizophrenia 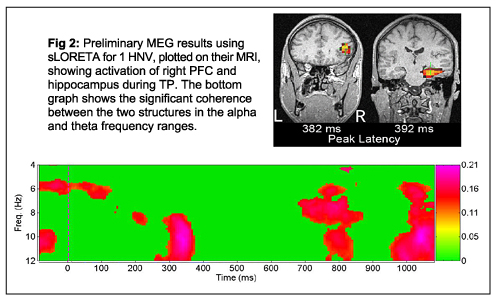 Prefrontal and hippocampal structures play a central role in the working and relational memory impairments exhibited in schizophrenia (Goldman-Rakic, 1994; Hanlon et al., 2005; 2006; Honey and Fletcher, 2006). These prefrontal cortex (PFC) and hippocampal functional deficits have traditionally been attributed to properties of the cortical structures themselves. However, an alternative view is that the deficits are due to the interactions or disconnection between these structures (Friston, 1999, 2002; Friston and Frith, 1995; Johnson, 2006). In combination with other Projects in this COBRE, Project 3 will be testing this disconnection hypothesis of schizophrenia: in particular, a disconnection between frontal and temporal cortices linked by the uncinate fasciculus. Indeed, the most striking evidence supporting abnormal fronto-temporal connectivity in schizophrenia is found in neuroanatomical studies that describe abnormalities in the uncinate fasciculus, a fiber tract containing direct frontal-temporal connections (Burns et al., 2003; Kubicki et al., 2002; Park et al., 2004). Despite this finding of an anatomical connectivity abnormality, the functional connectivity of this network has not been sufficiently assessed. Investigating the functional connectivity is imperative for understanding the mechanisms and etiology of the memory deficits that likely contribute to the daily functional impairments and symptoms in schizophrenia. In Project 3, the functional and anatomical connectivity of a PFC-hippocampal network will be examined in patients with schizophrenia (SP) using a transverse patterning (TP) task (Hanlon et al., 2003; 2005). 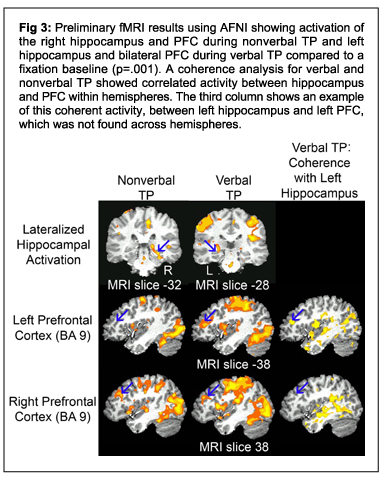 TP is very similar to the childhood-game "Rock, Paper, Scissors". In TP, subjects choose between stimuli presented in pairs, with the correct choice being a function of the specific pairing. To complete the task, the subject must discover, encode, and maintain the distinct relationships among the stimuli, thus requiring working memory and relational memory integration. In Project 3, multimodal neuroimaging with functional magnetic resonance imaging (fMRI) and magnetoencephalography (MEG) techniques will be used during TP performance to assess fronto-temporal functional connectivity by examining the temporal correlation, or coherence between the PFC (BAs 9 and 10) and hippocampus. In addition, this fronto-temporal functional connectivity will be compared to anatomical connectivity using diffusion tensor imaging data measuring fractional anisotropy in the uncinate fasciculus. Finally, the relationships between fronto-temporal connectivity (functional and anatomical) and PFC and hippocampal memory function, overall functioning, and clinical symptomatology will be examined. Understanding these relationships could potentially lead to treatments or therapies aimed at improving memory, thereby improving overall functioning and clinical symptoms. This project thus addresses basic clinical (is there a fronto-temporal disconnection in schizophrenia?) and translational (is this fronto-temporal disconnection related to memory deficits, overall functioning, and schizophrenia symptoms?) research questions.

Dr. Faith Hanlon, PI of Project 3, is a Research Scientist at the MRN and a Research Assistant Professor at the UNM Departments of Psychiatry and Psychology. She received her PhD in Experimental Psychology, majoring in Behavioral Neuroscience and minoring in Neuropsychology of Psychopathology. Her research background includes human and non-human animal research, specializing in the assessment of limbic function, including hippocampus and amygdala, as well as sensory gating in clinical disorders. She has extensive experience in MEG recordings, clinical reads, neuropsychological testing, research design, and working with temporal-lobe epilepsy and SP, beginning with the NM VA Psychiatry Research Group headed by Dr. Canive, and now at the MRN. Her recent research has focused on hippocampal function/memory in schizophrenia, using sMRI, MEG, and neuropsychological assessment. Dr. Hanlon has published 15 peer-reviewed papers using MEG and has received both competitive intramural funding (UNM Research Allocation Committee) and extramural funding (Epilepsy Foundation Grant) to investigate hippocampal function in healthy and patient populations. Dr. Hanlon's career goals are to extend her MEG expertise to include multimodal neuroimaging and the assessment of network connectivity so that she can eventually obtain independent R01 funding using both techniques.