Multimodal Imaging of the Sensory Gating Deficit in Schizophrenia

Multiple lines of research have consistently documented sensory processing deficits in patient with schizophrenia (SP). One such deficit is poor sensory gating, in which there is an increased electrophysiological response for the second of two rapidly presented stimuli in SP compared to healthy normal volunteers (HNV). This effect is typically reported in terms of a gating ratio comparing the amplitude of the response for both the first (S1) and second (S2) stimulus (S2/S1*100). Poor sensory gating has been characterized as both a deficit in selective attention and/or in the formation of memory traces, and is a useful bio-marker of the cognitive and social dysfunction that is typically observed in SP. EEG and MEG studies of sensory gating have implicated the temporal lobes, including the superior temporal gyrus, as the most likely neuronal generator of the sensory gating deficit. Although other invasive neuroimaging techniques suggest a role for the hippocampus and prefrontal cortex in sensory gating, neither EEG nor MEG studies have revealed hippocampal activation. While this negative result may be reflective of a true lack of hippocampal activation in gating, it may also be secondary to technical limitations with EEG and MEG, such as poor spatial resolution, failure to examine appropriate time epochs, and/or difficulties localizing sources in deep structures under certain conditions. In contrast, fMRI is not restricted by any of these limitations, suggesting that it may be an alternative mechanism for studying the entire neuronal network underlying the gating deficit, including mesial temporal and prefrontal sources. The current application proposes to use several neuroimaging modalities, including MEG, EEG and fMRI to identify where and when the sensory gating deficit occurs in schizophrenia. The combination of multi-modal imaging techniques should lead to a more complete understanding of the complex neuronal pathology underlying schizophrenia and its cognitive manifestations. In the current protocol, SP and HNV will be presented with identical clicks, identical tones and non-identical tones while undergoing functional imaging. We are predicting that this will produce a double dissociation of functioning with SP exhibiting higher gating ratios for the identical tones and clicks conditions and lower gating ratios for the non-identical tones condition, whereas HNV will exhibit the opposite pattern. The functional data from these conditions will be directly compared and also correlated with behavioral and neuropsychological measures to further quantify the relationship between brain function and the observed clinical pathology which characterizes this basic inhibitory failure. Finally, impaired sensory gating is believed to be an endophenotypical marker for schizophrenia. Therefore, we will also investigate the genetic contribution to our measures of electrophysiological and hemodynamic functioning in both HNV and SP. 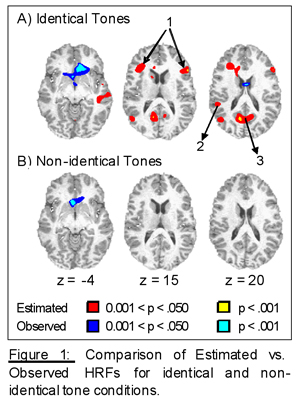 Dr. Andrew Mayer, PI of Project 1, has utilized fMRI to investigate cognitive functioning in both healthy normals and clinical populations with an emphasis on selective attention. He obtained his PhD in Clinical Neuropsychology from the Chicago Medical School where his training emphasized the relationship between neurology, psychiatry and cognition. During his graduate work, he became involved in several fMRI studies examining the neuronal substrates of cognitive and motor functioning, including his dissertation work examining the neural correlates of visual orienting using event-related fMRI for which he was awarded the Dean’s Award for Outstanding Achievement in Research. His Post-Doctoral Fellowship in Clinical Neuropsychology was completed at the MRN and the Department of Neurology at UNM. As part of his research rotations he collaborated on fMRI studies of time perception in schizophrenia and completed his own post-doctoral project examining the neural correlates of auditory orienting. He is currently a Research Scientist at the MRN and an adjunct Assistant Professor in the Department of Neurology, and is the PI on several projects investigating attentional functioning in healthy normals and neurodegenerative disorders, including schizophrenia. His primary career objective is to use multiple imaging techniques to investigate the neuropathology of clinical populations, particularly schizophrenia. To this end, he is seeking to gain more experience with several different neuroimaging techniques including MEG, EEG and cortical flat mapping and to learn new analyses techniques for combining this information.